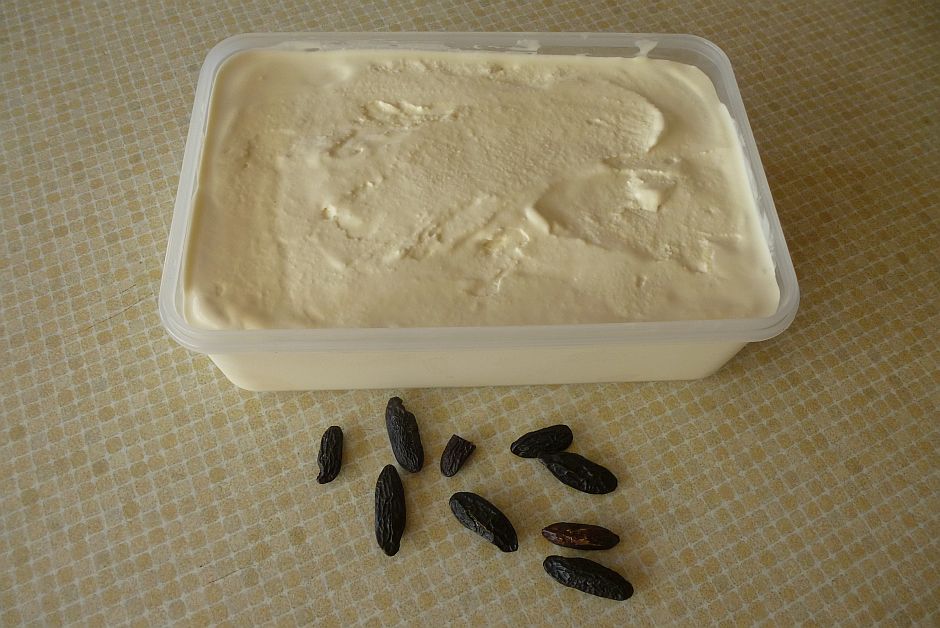 In the posting describing my recent lunch at Verveine I enthused about the flavour of tonka beans. Once home I did a Google to find a supplier, waited impatiently for them to arrive and was finally able to make tonka bean ice-cream today. My immediate reaction was to describe the flavour as “the first flavour to come through is vanilla, then it evolves into something a little woody and finally homes in on cedar”. One website has this to say about them “The taste of the tonka bean is linked strongly to its scent. “Scents,” I should say, as the tonka bean has many at once. I register the aromas of vanilla, cherry, almond, and something spicy—a bit like cinnamon. When served cold—say, in tonka bean ice cream—the taste is like a vanilla caramel with dark honey. When warm, perhaps shaved over scallops, it moves toward spiced vanilla. Additionally, the aroma of the tonka bean shavings (it’s almost always shaved) is so affecting that it seems like an actual taste in the way that opium, which has no taste in the traditional sense, “tastes” like its rich, flowery smoke.”

If that’s whetted your appetite here’s how I made the Tonka Bean Ice-Cream.

I mixed the milk and cream together in a saucepan and then using a fine grater grated the tonka bean into the milk cream mix. If you don’t have a very fine grater I think a nutmeg grater would be ideal. The milk and cream mixture was heated, but not allowed to come to the boil, before putting a lid on the pan and turning off the heat. This was left for about 15 minutes to infuse before straining through a seive to remove to remove the tonke bean gratings. Beat the egg yolks and sugar together thoroughly and then pour in the milk cream mixture stirring all the time. Back on the stove to reheat again without boiling, but stirring all the time. I use a thermometer and remove the pan from the heat when it reaches 85C. Allow to cool and then use whatever method you like to make the ice-cream. Ice-cream maker or straight into a container, part freeze, remove and stir, freeze again, remove and stir etc.